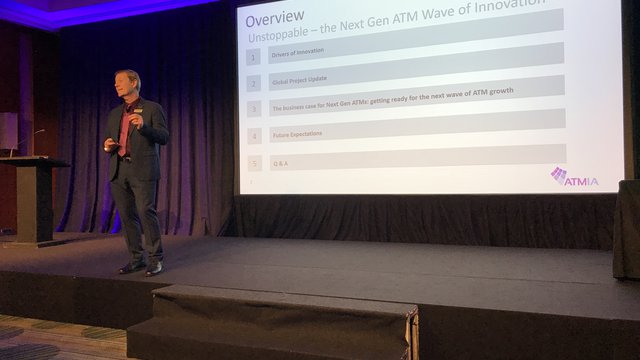 Mike Lee on stage at ATMIA Europe in Rome talking about next-generation ATMs.

Mike Lee is the quintessential diplomat. The CEO of the ATM Industry Association greets you with a smile and a warm handshake. He is the sort of person who appears to always have time for everyone.

But in meeting him, what you quickly learn is that despite his pleasant demeanor, Lee is a man with strong convictions, fiercely devoted to defending the use of cash.

Last week at an ATMIA conference in Rome, ATM Marketplace caught with him over cappuccino for a long chat about the war on cash and the future of ATMs. We even asked him about bitcoin.

Q: What are your thoughts on the war on cash?

A: The war on cash has become a philosophical and a political issue. It has reached a stage where the entities that want to abolish cash are impacting human beings around the world, and we are neglecting to look at the realities of the need for cash as well as some of the qualities that cash offers, such as privacy, which can't be replicated in a digital equivalence.

Q: The U.K. is moving toward cashlessness. Access to Cash Review chair Natalie Ceeney made it clear Britain doesn't know what will happen next. What role does Sweden play in all of this?

A: Britain is looking to Sweden as model for not going too far in pushing a cashless society. The Swedish government suddenly woke up one day and realized it had entered a period of high risk, in the sense that if a cyber attack were to take down their systems, chaos would ensue. So Swedish authorities are now recommending that the citizens of Sweden keep an emergency stock of cash at home.

Britain is saying, hang on, Sweden was the poster child for a cashless society, and now they are pushing back and saying we went too far. You need to have a cash system that works, so that people are free to choose. That was the philosophical issue. But you also need cash so that society can continue to operate in the event of an emergency.

Q: Earlier, you said something about the public not fully understanding the consequences of access to cash being taken away from them. What did you mean?

A:It is a kind of brainwashing through openly propagandistic anti-cash messages, which are completely phony. These messages have no basis in reality or fact. They are designed to brainwash people into thinking that it is inevitable that cash has to go away.

Q: Does it have to be one or the other? Cash or digital?

It is actually a false dichotomy. You have cash, and you have digital payments. They co-exist quite happily. Keep your access to cash. It is one of the most important freedoms that we have in society.

Q: Many people have this, sort of, "Well, I have nothing to hide, so what am I worried about?" attitude toward privacy. What are the dangers?

A: Whenever you use an electronic form of payment, your movements are tracked by GPS, your transactions are tracked and recorded, and that data is aggregated and sold to be used for marketing purposes where it (potentially) becomes a violation of your privacy. Cash offers anonymity. When I pay with cash, there is no company watching over what I am doing and collecting data about me, which is put into a pool, so that it can be exploited for marketing purposes.

Q: Who are the companies pushing the cashless agenda?

A: Visa and Mastercard are spending the most money to do that. It is primarily a war that they started. At the expense of so much going on in the world, they are promoting messages that are ultimately destructive. But their technology, I don’t have a problem with. It is a good technology, which is why I say we all go together on one journey.

Q: Do you think digital currencies, like bitcoin, could replace cash and the need for anonymity?

A: I don't think digital currency is going to replicate the qualities of cash. It is a whole different ball game. I don't have a problem with digital currencies as long as they are well regulated. Bitcoin is mathematically sound, it has benefits, but there has got to be some regulation, and you've got to look at the security aspects of it.

We also see a company like Uber that was supposed to be cashless from day one. They realized that was impossible in the real world, and they came out with Uber cash. And Amazon now hast real stores. So the physical and the digital, they coexist. That is why I say the future is parallel. Digital payments and cash work together, in my view.

Q: What is the story behind next-gen ATMs, starting with a definition?

A: A next-gen ATM is an app-based ATM. The consumer would have an app and transact with the ATM through the mobile phone instead of the card. The architecture that you need to make that happen is quite complicated, but we have designed a blueprint, which has got incredible global consensus around it.

The initiative started with a bunch of banks effectively saying, "Hey, we are tired of these costly upgrades to Windows." You have a 10-year hardware lifecycle but these migrations to new operating systems are happening in between.

As a result, a subcommittee of banks got together, and over several weeks back in 2016, came up with this idea of an API app model and put it in the form of a request for information, which ATMIA sent to 65 manufactures, vendors and suppliers for confidential feedback. We were astounded that the vendors and suppliers totally agreed with the deployers that this is the way to go.

So the whole idea is to link over 3 million ATMs and more than 5 billion mobile phones and create a new ecosystem around that.

Q: So the ATM then becomes like a bank?

A: A bank in a box. We use the word "hub," and I think that is a beautiful description because ATMs are really financial services and community hubs. The next-gen ATM will be more flexible. It will allow different configurations, so retailers will be able to get involved as well.

Amy Castor has more than 20 years of experience in journalism and mass communications. In the last several years, she has gotten particularly interested cryptocurrencies, blockchain technologies and other evolving forms of payment. Her work has appeared in consumer and trade publications throughout the U.S., including CoinDesk, Forbes, and Bitcoin Magazine. She is now the editor of ATMmarketplace.com and WorldofMoney.com 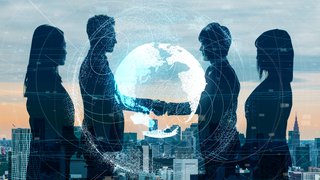